FROM THE ELEPHANT AND CASTLE TO THE BRICKLAYERS ARMS 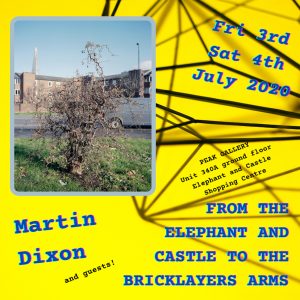 Four days at the Elephant and Castle Shopping Centre

As England emerges from Covid 19 lockdown Peak Gallery in the Elephant and Castle Shopping Centre put out a call for artists to show work in two-day slots during July. The space itself would not be open to the viewing public; instead work could be seen through the plate glass window and door. Peak were strongly against the push to get things ‘back to normal’, exposing people to risk Covid-19, so instead everyone who walked through the Shopping Centre, whether they were just passing or if they’d come specially could look through the window and enjoy the work. How could I resist? I’m a long time fan of the charms of the Elephant and Castle Shopping Centre and so I put in an application and forgot about it.

Wednesday
I heard that I’d been accepted and would I be ready to install to for Friday? A tight turnaround! 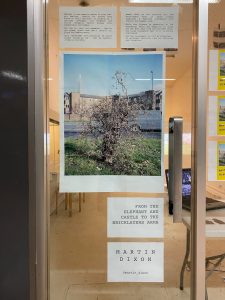 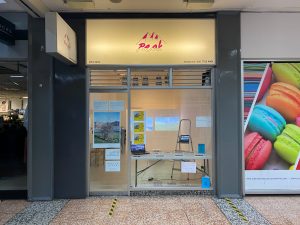 Thursday
After teaching in the morning I swing by the gallery and pickup the keys. Later I’m back with my first idea for the install. A video projection onto the back wall of the Bricklayers Arms double circumnavigation video and two laptops, one on the table and the other on a stepladder, showing a version each of the films in abstracted black and white. My friend XC came down and helped with the install offering tech support and a good eye for what might work and not.

Later I print a poster (8 x A4 sheets) of the corkscrew hazel tree for the door – write some text and name the show FROM THE ELEPHANT AND CASTLE TO THE BRICKLAYERS ARMS – two places I’ve been quietly obsessing about over the past few years.

Much of my work is based on what’s been happening in the locality, and what’s been happening here in the shopping centre is the grim effects of gentrification. This was one of the first shopping centres ever to be built back in 1965 and you really see how these developers have no vision to include the people who live and shop here on any level – they just want them out. It’s all about money and attracting a new demographic. A lot of people have already left, all the people who came everyday to the large Bingo hall upstairs, for many of them that was their life. Then the ten pin bowling that brought a whole collection of people in. Already a lot of the traders from the market around the outside of the centre have gone. Cafes have closed and even though lockdown has been lifted and people returning its still been tough, Card Factory has gone, Smiths has closed. 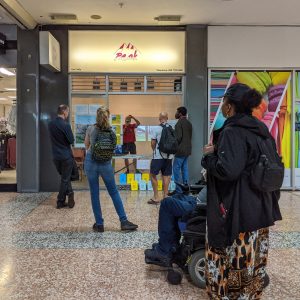 Friday
I run to the gallery for 7am and put the new posters up. Already I know that the show by itself is not enough, more need to happen. I get the idea to open the show by doing a live-streamed run from the Elephant to the Bricklayers – just half a mile down the road. As I set off I quickly realise that there’s not much joy to be had from watching a sweaty old man run on a live stream so I flip the camera round to look at where I’m going. I run down the New Kent Road, dodging the traffic and pedestrians and chatting away on the live stream. At the Bricklayers I say hello to the Monkey Puzzle and Cork Screw Hazel trees. By chance Ted from Brixton catches the live stream so I give him a wave, but I haven’t worked out the whole interactive nature of it – it was just me talking and the camera showing where I was.

Back at the gallery some friends drop by which and it starts to feel like something’s happening. I ask my friend Charlie if he was interested in doing a talk and walk around the centre and for me to live stream it out. Live stream is all new to me so after consulting the teenager in the house I settled on doing it on Instagram live stream, which tied in with where i was most active these days. Charlie told stories about the culture and arts he’d been involved in in the area then we bumped into a fella called Jez who was keen to talk about all sorts of history, 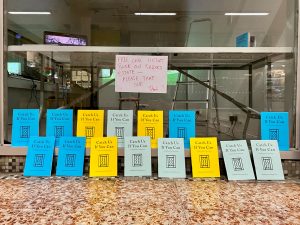 Saturday I met with an artist friend Jules to do a quick live stream from the Bricklayers Arms roundabout itself. She had lots of sad childhood memories from growing up in the areas so i wanted to keep it light. We stated on top of one of the hills and we were quickly off trying to identify trees by the their bark, something that Jules has been learning. It was great fun and we had a real laugh, especially as she wasn’t so certain of what tree was what! So we walked around looking and feeling the bark of the trees.

Came back to the gallery and added some photos of the Bricklayers on the table at the front, some sketches and contact sheets on the floor and five photographs of the manhole covers on the high wire across the gallery on a high wire and set the sound side of things up. My son Henry as well as being an aspiring jazz pianist also makes his own music using software called Ableton on the computer. I’d asked him if he’d like to play some of his tunes. He gave a few stipulations – he didn’t want to link it to his ‘professional’ name and Instagram account but was happy to do it as Henry my son, which was sweet – also not on camera and not into being interviewed. He came down 11.30 there was a small crowd, set him up and I had the Organelle ready to fill in the gaps as he selected his tracks off the phone. He didn’t really want to be interviewed despite my cheesy dad questions “what’s this style of music called?’ etc. He played out six tunes and I introduced it and then set up a different camera shot for each tune. At which point I was a bit wired so shot home had some pasta and then back a bit more relaxed.

Then at 2.00 XC came back down and we’d decided we would do something together and I let him title it as Gentrification Stream of Consciousness. We’d thought about a 2-hour slot but then worked on 2 x 40 minute sessions with a break between. So we could do it and then think how it might be different on the 2nd set. He didn’t want to be recognised by name or face and so he’d brought a squirrel mask and was calling himself XC and I chose MDX , a moniker I’d used for my electronic music before.

So he was incognito, set him up on a chair and a static camera for the live stream looking back into the gallery with the screen of the video running behind him. The door was closed and in retrospect we should have propped it open and blocked access with a chair or something so the sound could get out. As it was we had the speakers up high next to the open slatted window, which kind of worked but meant it had to be loud in the gallery for ut to be hard outside.

XC started his story describing the relentless gentrification that’s been happening in the area from the Heygate, the Ledbury, the Aylesbury and now the shopping centre. People being forced out of the area. He did a good 40 minutes and I filled in with drones and crackly beats. After a 20 break we did part 2 and I did some more musical melodic and rhythmic things going on the Organelle, XC would play out field recordings from his laptop and chop and change them on the fly in Audacity. It was our first time trying it out so it was pretty improvised but it mostly worked. Started the live stream just looking out the window, watching people looking in and walking by. 4 live streams in one day – epic! 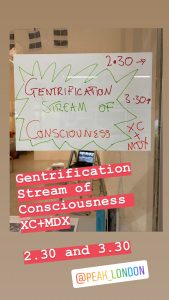 Sunday
I clear the show up and sit up the Bricklayers, a bright sunny Sunday morning. Traffic a crow cyclists a car the more I come here and spend time here the more connected I feel to it and making work helps that. Part of the attraction of the place is that no body else seems to pay it much attention. People walk through it but nobody walks around it – who would. I could publish a booklet about a walk around the Bricklayers – maybe I don’t need to do anything – I’m not an evangelist about it but I like feeling connected to it – so here it is – very windy today – Bricklayers Arms thank you – all the trees, the creatures, the man who lives in the tent under the flyover, whoever planted all these trees, a special place.

So, if you have a bit of energy and vision you can put something together real fast, and there’s something about working fast in that way rather than the endless laboured work of the MA where everything is scrutinised and takes ages – feels very heavy and leaden in comparison. Of course that’s what an MA is, it’s not improvisation photography. Maybe that’s what I need to do. I feel positive about it as a development of my practice. This show has included photography and video but it’s also been about walking, talking, being in the environment and creating together rather than being a static observer of stuff. It feels good.

Thank you and goodbye Elephant and Castle, we all know that whatever comes next will be shite, money and nonsense – times they are a changing and not for the better.

I head off for some music playing with my folk band up at Arnold Circus bandstand in Shoreditch.