In America, the state of Texas is currently attempting to pass Bill 2918, outlawing the taking of photographs within a 25-foot radius of a police officer. Here in England we are subject to a litany of places and people we are not allowed to photograph, and while we internalise the media’s rhetoric of the photographer as ‘no-good predator’, the state’s panoptic gaze scrutinises our every movement.

I took this photograph at the end of March for Homes, a demonstration against the proposed demolition of the Aylesbury Estate in south London. Taking photographs gave me something to do, but then I started to wonder – was it the best thing?  What did I hope my photographs might do, or say about what I saw happening?

A lot of people where taking photographs that afternoon.

A large section of the west of the Aylesbury Estate has already been emptied of tenants and leaseholders, but some remain, alongside housing activists squatting empty flats as protest. Southwark council has built a large fence around this part of the estate, effectively imprisoning the remaining residents, who now can only access their homes by asking permission from security guards at the one allowed gate. While the council claims this is to protect the remaining residents and “restrict entry to unauthorised persons”, it seems just as likely they want to minimise opposition, get the area cleared and sold off to private developers as quickly as possible. Like they did at the Heygate Estate, just up the road at the Elephant and Castle.

As the demonstration reaches the gates in the fence some protestors manage to push past the security guards and onto the estate. Squads of police quickly arrive to guard the gates, while protestors harangue the police and security for their shameful behaviour.

It can seem hard to know where or how to begin documenting what is happening here. It is so huge – this monolithic ideology of self-perpetuating greed. An ideology which wants the whole of London sold off, bought up, cleansed and rebuilt as a giant mall, a citywide replication of the horror show that is the millennium dome. But, we see what you are doing. We understand what we have to loose and what you hope to gain. And we will record your actions, we will document you in every way we can – we will write and record and film and photograph. 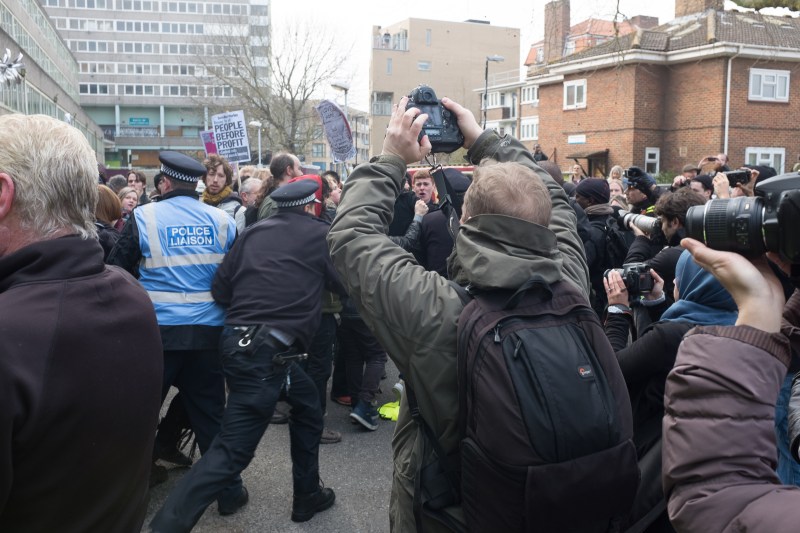